We argue for the value of small- to mid-scale environments in deep RL for increasing scientific insight and help make our community more inclusive.

This is a summary of our paper which will be presented in the deep reinforcement learning workshop at NeurIPS 2020.

The code is available here.

You can see the Deep RL talk here.

Since the introduction of DQN (Mnih et al., 2015) reinforcement learning has witnessed a dramatic increase in research papers (Henderson et al., 2018). A large portion of these papers propose new methods that build on the original DQN algorithm and network architecture, often adapting methods introduced before DQN to work well with deep networks. New methods are typically evaluated on a set of environments that have now become standard, such as the Arcade Learning Environment (ALE) (Bellemare et al., 2012) and the control tasks available in MuJoCo and DM control suites (Todorov et al., 2012), (Tassa et al., 2020).

While these benchmarks have helped to evaluate new methods in a standardized manner, they have also implicitly established a minimum amount of computing power in order to be recognized as valid scientific contributions.

Furthermore, at a time when efforts such as Black in AI and LatinX in AI are helping bring people from underrepresented (and typically underprivileged) segments of society into the research community, these newcomers are faced with enormous computational hurdles to overcome if they wish to be an integral part of said community.

In this work we argue for a need to change the status-quo in evaluating and proposing new research to avoid exacerbating the barriers to entry for newcomers from underprivileged communities.

We complement this argument by revisiting the Rainbow algorithm (Hessel et al., 2018), which proposed a new state of the art algorithm by combining a number of recent advances, on a set of small- and medium-sized tasks. This allows us to conduct a “counterfactual” analysis: would Hessel et al. [2018] have reached the same conclusions if they had run on the smaller-scale experiments we investigate here? We extend this analysis by investigating the interaction between the different algorithms considered and the network architecture used; this is an element not explored by Hessel et al. [2018], yet as we show below, is crucial for proper evaluation of the methods under consideration.

The Cost of Rainbow

Although the value of the Rainbow agent is undeniable, this result could have only come from a large research laboratory with ample access to compute:

Thus, to provide the convincing empirical evidence for Rainbow, Hessel et al. [2018] required at least 34,200 GPU hours (or 1425 days); in other words, these experiments must be run in parallel with multiple GPUs.

Considering that the cost of a Tesla P100 is about US$6,000, it becomes prohibitively expensive for smaller research laboratories. To put things in perspective, the average minimum monthly wage in Latin America (excluding Venezuela) is approximately US$313 (data taken from here); in other words, one GPU is the equivalent of approximately 20 minimum wages. Needless to say, this is far from inclusive. 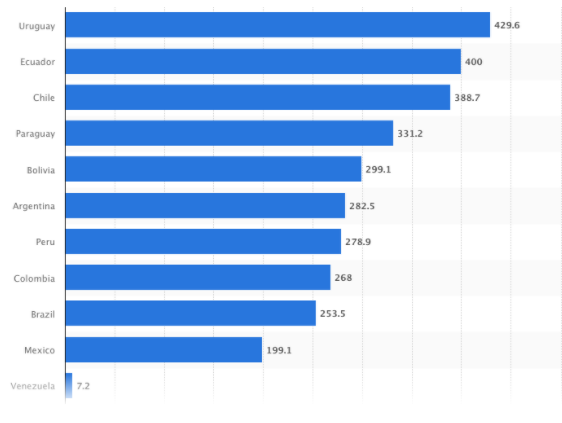 As in the original Rainbow paper, we evaluate the effect of adding the following components to the original DQN algorithm:

Our first set of experiments were performed on four classic control environments: CartPole, Acrobot, LunarLander, and MountainCar. We first investigate the effect of independently adding each algorithmic component to DQN:

Just like Hessel et al. [2018] we find that, in aggregate, the addition of each of these algorithms does improve learning over the base DQN. However, while Hessel et al. [2018] found prioritized replay and multi-step to be the most impactful additions, in these environments the gains from these additions are more tempered. What is most interesting is that when distributional RL is added to DQN without any of the other components, the gains can sometimes be minimal (see LunarLander), and can sometimes have a large negative effect on learning (Acrobot and MountainCar). This is consistent across the various learning rates we considered.

In contrast, when we look at the removal of each of these components from the full Rainbow agent:

In order to strengthen the Rainbow connection, we also ran a set of experiments on the MinAtar environment Young and Tian, 2019, which is a set of miniaturized versions of five ALE games (Asterix, Breakout, Freeway, Seaquest, and SpaceInvaders). These environments are considerably larger than the four classic control environments previously explored, but they are significantly faster to train than regular ALE environments. Specifically, training one of these agents takes approximately 12-14 hours on a P100 GPU. For these experiments, we followed the network architecture used by Young and Tian [2019] consisting of a single convolutional layer followed by a linear layer. 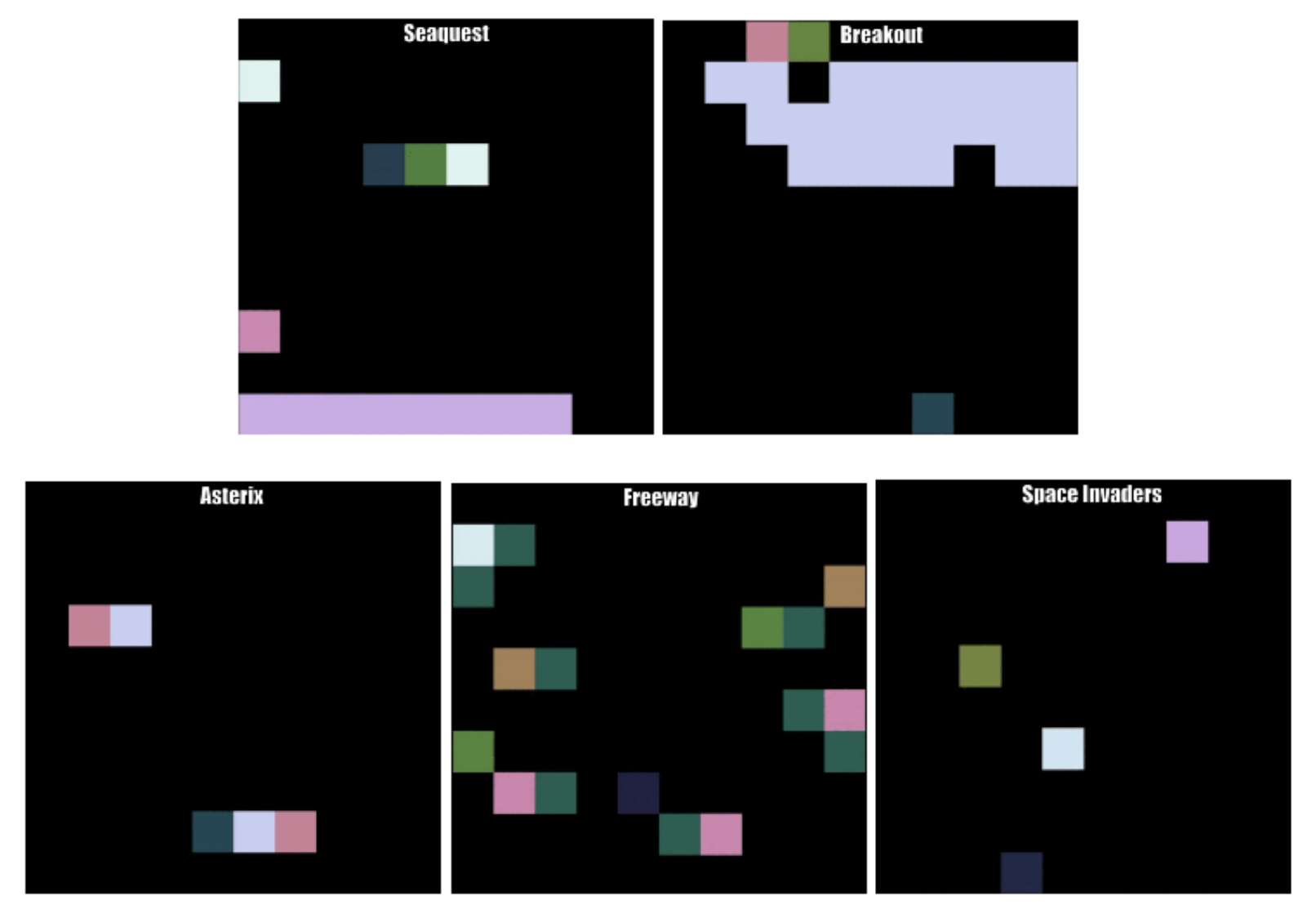 In these experiments we still find distributional RL to be the most significant of the additions, but it does not seem to require being coupled with another algorithm to produce improvements. This begs the question as to whether the use of distributional RL with convolutional layers avoids the pitfalls sometimes observed in the classic control experiments. However, the results from Seaquest suggest that the combination with one of the algorithms is hurting performance; based on the ablation results from Rainbow, it appears that noisy networks have a detrimental effect on performance.

When viewed in aggregate we find our results consistent with those of Hessel et al., 2018: the results for each algorithmic component can vary from environment to environment. If we were to suggest a single agent that balances the tradeoffs of the different algorithmic components, our version of Rainbow would likely be consistent with Hessel et al.: combining all components produces a better overall agent.

However, there are important details in the variations of the different algorithmic components that merit a more thorough investigation. An important finding of our work is that distributional RL, when added on its own to DQN, may actually hurt performance. Our investigation suggests that its true benefits come when combined with another algorithmic component (in the classic control environments) or when used on a convolutional neural network (as in the MinAtar games). Investigating these interactions further will lead to a better understanding of distributional RL.

We leverage the low cost of the small-scale environments to conduct a more thorough investigation into some of the algorithmic components studied above.

We begin by questioning the choice of the Huber loss, which is what is usually used to train DQN agents as it is meant to be less sensitive to outliers. We trained our agents using the mean-squared error loss and found the surprising result that on all environments considered using the MSE instead of the Huber loss yielded improvements, and in all but one environment (Freeway) the improvements were significant, sometimes even surpassing the performance of the full Rainbow agent.

This begs the question as to whether the Huber loss is truly the best loss to use for DQN, especially considering that reward clipping is typically used for most ALE experiments, mitigating the occurence of outlier observations.

We investigated the interaction of the best per-game hyper-parameters with the number of layers and units per layer. It is worth highlighting once again that the low computational cost of these experiments is what allows us to perform these thorough sweeps.

Aside from CartPole, DQN appears to be fairly robust to the choice of number of layers and hidden units. 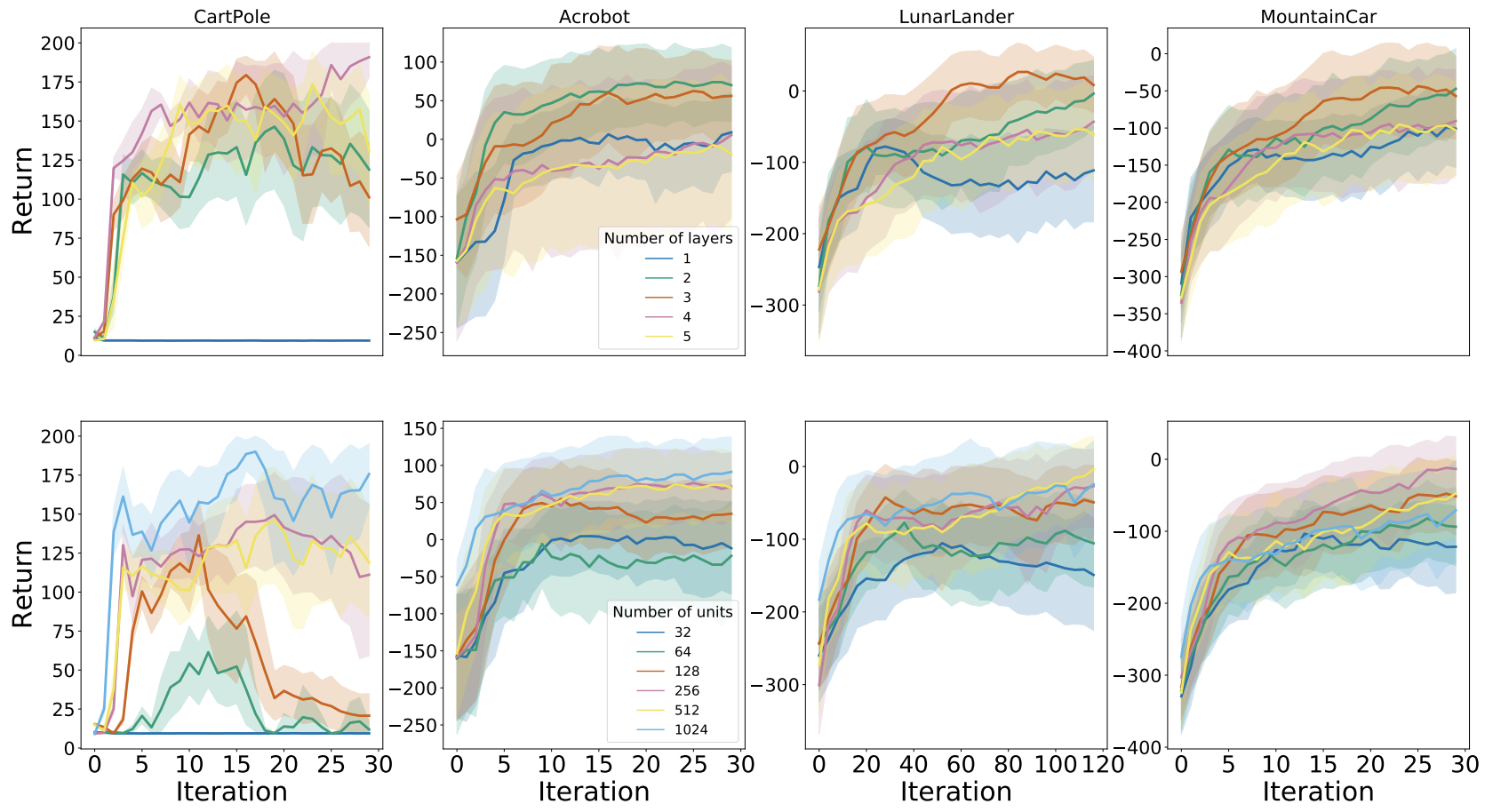 We observe a similar story with Rainbow. 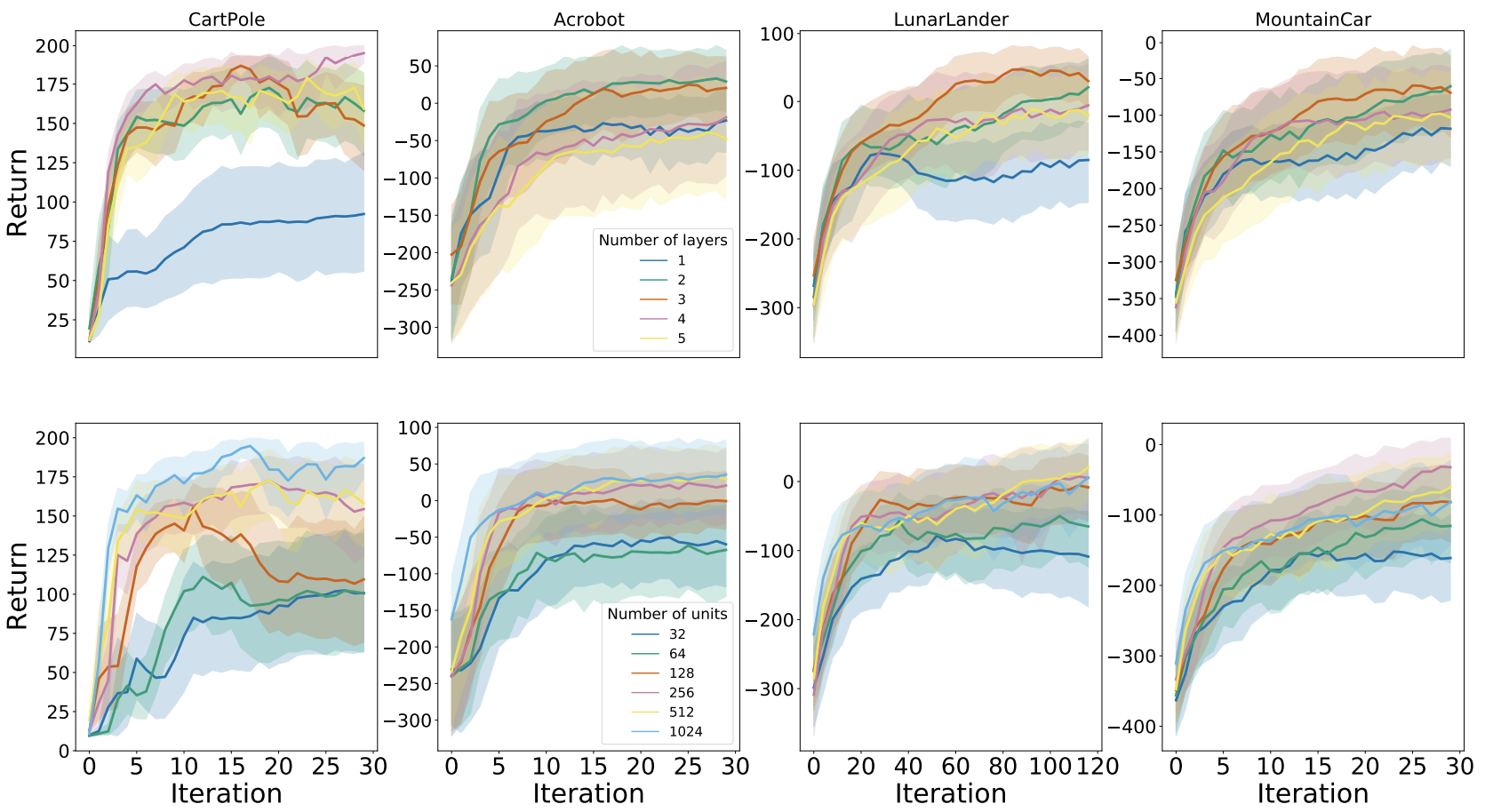 Another often overlooked hyper-parameter in training RL agents is the batch size. What we found is that while for DQN (top row) it is sub-optimal to use a batch size below 64, Rainbow (bottom row) seems fairly robust to both small and large batch sizes. 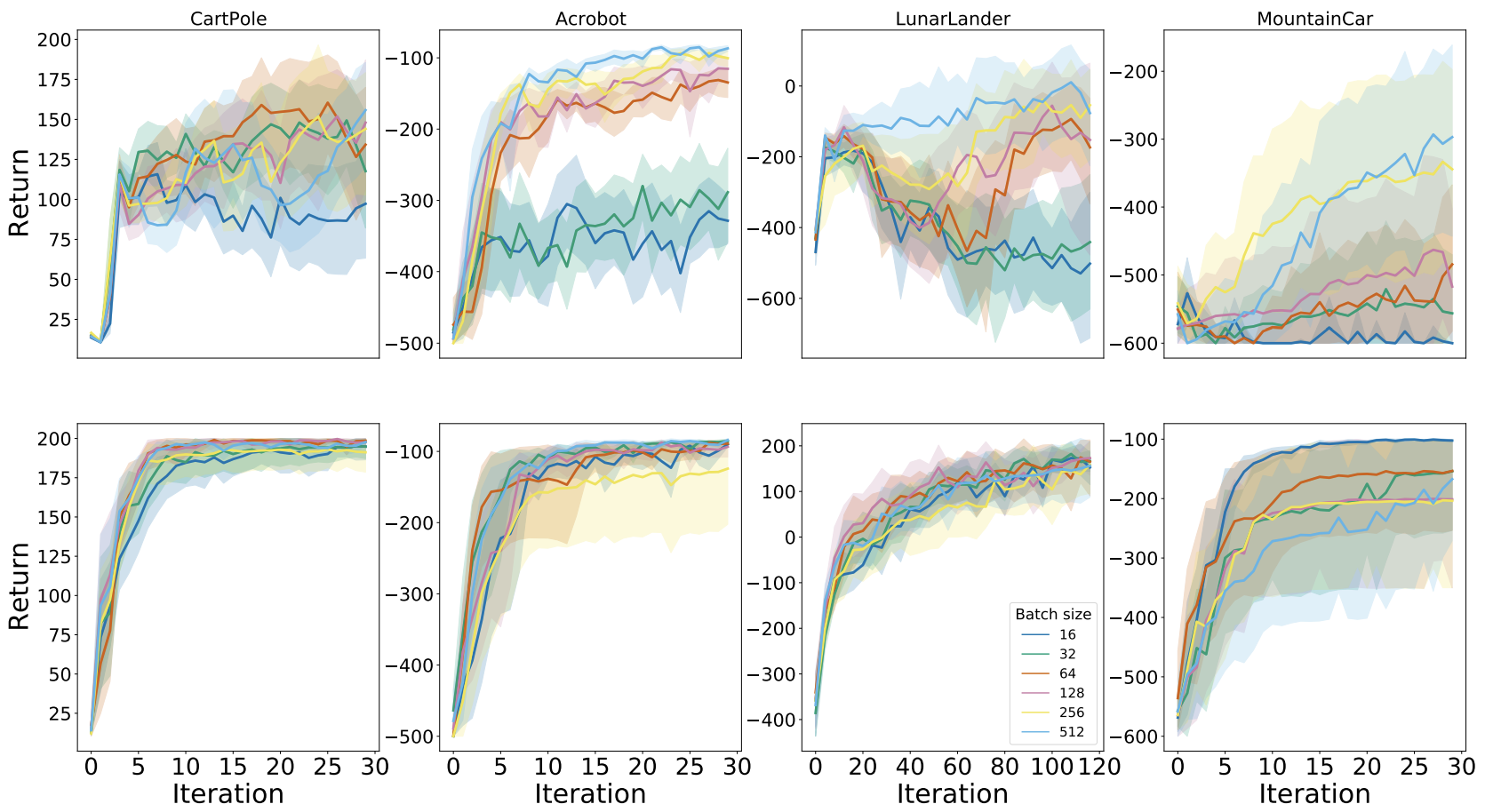 Overall, it seems that while using quantiles yields results comparable to C51, they are much less sensitive to varying learning rates. However, we found that the combination of quantile regression with dueling networks led to no learning, in stark contrast to what Dabney et al. [2017] hypothesized when introducing QR-DQN. This is a surprising finding which we plan to investigate further.

On a limited computational budget we were able to reproduce, at a high-level, the findings of Hessel et al. [2018] and uncover new and interesting phenomena. Evidently it is much easier to revisit something than to discover it in the first place. However, our intent with this work was to argue for the relevance and significance of empirical research on small- and medium-scale environments. We believe that these less computationally intensive environments lend themselves well to a more critical and thorough analysis of the performance, behaviours, and intricacies of new algorithms.

We are by no means calling for less emphasis to be placed on large-scale benchmarks. We are simply urging researchers to consider smaller-scale environments as a valuable tool in their investigations, and reviewers to avoid dismissing empirical work that focuses on these smaller problems. By doing so, we believe, we will get both a clearer picture of the research landscape and will reduce the barriers for newcomers from diverse, and often underprivileged, communities. These two points can only help make our community and our scientific advances stronger.

The authors would like to thank Marlos C. Machado and Sara Hooker for their insightful comments on our work.