You can also watch a video where I go through the basics here.

The following image depicts the typical flow of a reinforcement learning problem. 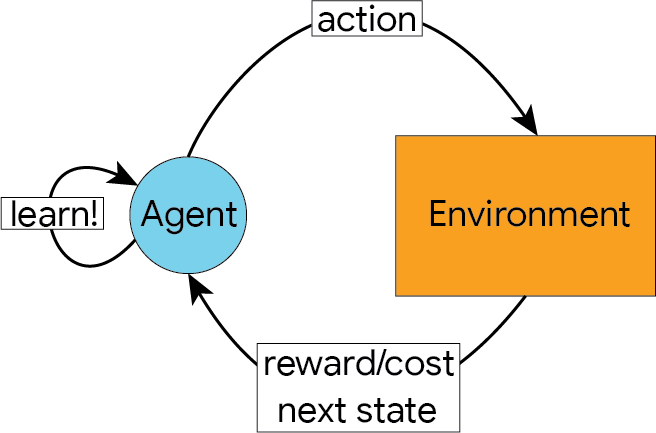 The notebook is roughly organized as follows:

Consider the following simple grid where the agent (the blue circle) must navigate to the gold star by choosing from four actions at each grid cell (up, down, left, right):

Being able to see the whole grid, it is trivial for us to find a shortest path to the gold star (the optimal policy for the agent):

In reinforcement learning problems, however, we typically do not have immediate access to the environment. In our simple example, the agent may simply know the number of cells in the grid, but may not have any information on what is contained in each:

The agent must then explore the environment by taking actions and keeping track of what is encountered at the different cells:

To anticipate some of the concepts that will be formalized below, the grid represents the environment. This environment consists of:

The agent is typically aware of the states and actions, but not of the transition dynamics nor reward signal. Thus, the agent make use of a method that:

This last point is the “exploit-explore dilemma”, which is a central (and open!) problem in reinforcement learning. How to best balance this tradeoff in a computationally efficient manner is the subject of active research.

To illustrate its importance, assume the agent encountered a small reward in the grid. If at that point the agent were to decide to purely exploit its current knowledge, it would settle on the policy below, without ever exploring the unknown area where a larger reward awaits:

Having finished this motivating example, we are now ready to dive into the mathematical details.

More formally, the problem is typically expressed as a Markov decision process $\langle\mathcal{S},\mathcal{A},R,P,\gamma\rangle$, where:

The notation $\Delta(X)$ stands for the set of probability distributions over a set $X$.

Since the discount factor $\gamma$ is strictly less than $1$, it encourages the agent to accumulate rewards as quickly as possible. In the motivating example above, it means the optimal policy is also the shortest path to the big star. Having $\gamma = 1$ would mean that the agent perceives no difference between taking a short or long path to the gold star.

A policy $\pi$ is a mapping from states to a distribution over actions: $\pi:\mathcal{S}\rightarrow\Delta(\mathcal{A})$, and encodes the agent’s behaviour. The value of a policy $\pi$ from an initial state $s_0$ is encoded as:

This is quantifying the expected sum of discounted rewards when starting from state $s_0$ and following policy $\pi$. It turns out we can express value functions for any state $s$ via the recurrence:

or equivalently, replacing the expectation over actions with a summation:

We may sometimes also be interested in the value of performing action $a$ from state $s$, and then following policy $\pi$:

The goal of the agent is to find a policy $\pi^*$ that dominates all other policies: $V^* := V^{\pi^*} \geq V^{\pi}$ for all $\pi$. It turns out that there is always a deterministic policy that achieves the optimum. The Bellman optimality equations express this via the recurrence:

The state-action value function can be defined in a similar way as above:

To begin with, run the first two cells below to install and import all necessary packages.

If we have access to $P$ and $R$, then we can compute $V^*$ in a few ways. We will explore two common methods here:

When the transition and reward dynamics are known, these problems are typically referred to as planning problems, which has its own field of active research. In this scenario, the “agent” does not need to interact with an environment to gather information for improving its policy. There is a close relationship between planning and reinforcement learning, and many lines of research sit at their intersection.

For our purposes, it will be useful to review some solutions to the planning problem, as they will serve as foundations for the learning algorithms we present further down.

In Value iteration we are continuously updating an estimate $V_{t+1}$ by leveraging our previous estimate $V_t$.

This is typically referred to as the Bellman backup. It can be shown that, starting from an initial estimate $V_0$, $\lim_{t\rightarrow\infty}V_t = V^*$.

This gives us the value iteration algorithm:

It will be useful to think of the functions above as vectors, which then allows us to do the Bellman backup with matrix operations. If we assume our matrices have the following shapes:

Then we can compute $V$ with two lines of numpy code:

Alternatively, we can use the einsum function, which can help clarify the dimensions along which the multiplication is happening:

The code cell below is an implementation of value iteration.

Instead of iterating over $V_t$, we can iterate over $\pi_t$ and stop once the policy is no longer changing. The algorithm proceeds as follows:

What if one does not have access to $P$ and $R$? This is the most common scenario in reinforcement learning problems, and here the agents must learn how to behave by interacting with the environment.

The diagram below depicts this pictorially:

Two common approaches for handling this are:

There are pros and cons for each of these approaches, and there is extensive (and continuing) research for both.

For example, model-based methods tend to be more sample-efficient, since one can always sample from $\hat{P}$ and $\hat{R}$ without having to interact with the real environment.

On the other hand, model-free methods are typically easier to learn and update in an online fashion (as new experience arrives), which is usually desirable.

Within model-free methods, there are two main approaches used: value-based versus policy-based.

Once again, there are pros and cons and extensive literature for both of these approaches.

In this notebook, we will focus on value-based methods.

You can learn more about policy-based methods in the Sutton & Barto book and in the Spinning up in Deep RL post by Open-AI.

One of the central issues in reinforcement learning is the exploration-exploitation dilemma. This was briefly introduced in the motivating example at the top, but is critical to the eventual performance of the agent.

Selecting a sub-optimal action is what is referred to as exploration, since the reasoning behind choosing sub-optimally is precisely to explore the environment and potentially discover better policies.

A purely exploratory policy would not be desirable either, as the agent would then always select actions randomly, which would make it unlikely to maximize the expected rewards received.

As mentioned previously, balancing this exploration-exploitation tradeoff is a very active area of research.

Perhaps the simplest and best-known exploration method is $\epsilon$-greedy exploration. At state $s$, given a policy $\pi$, the rule for this exploration policy is simply:

Perhaps the simplest way of estimating the sum of future returns is using Monte Carlo methods. These methods execute full trajectories in the environment and estimate $V^{\pi}$ by averaging the observed trajectory returns.

The algorithm can be described as follows:

The next code cell implements this approach.

Although Monte Carlo methods can update value estimates based on interactions with the environment, a more common approach in reinforcement learning is to use Temporal-Difference (TD) methods. This approach combines ideas from Monte Carlo estimation and dynamic programming.

Here, $\alpha\in[0, 1]$ is the step size, and determines how aggressively we will update our estimates given new evidence from the environment.

In this simplified setting we are assuming $\alpha$ remains fixed once selected, but there are more sophisticated methods which varies it throughout training. The algorithm proceeds as follows:

The next cell provides an implementation of Q-learning.

The rest of this intro is hands-on, so you should follow the instructions in the colab.