Tips for Interviewing at Google

Disclaimer: This post reflects my personal views and not those of my employer.

People often ask me: How do I get a job at Google?

An essential requirement is passing the interviews; unsurprisingly, this is another common question: How do I pass the Google interviews?

While there is no hard and fast rule to pass the Google interviews, I do have some tips and guidelines that have helped others in the past (including myself). Although most of this post is Google-specific, most of it should still apply for software engineering positions at other companies. This post mostly applies to Software Engineering (SWE) positions, but some of it should still be relevant for other positions (like Research Scientist); see at the end for some thoughts on this. Although the Google interview process is not perfect, I do feel it is pretty good and objective. Whatever the outcome, remember that your self-worth should not be defined by whether you get an offer.

Should I even apply to Google? is another common question. The answer is almost always: yes! It will test your limits, and you’ll likely learn something about where you could improve! And if you do try but don’t manage to make it through, I guarantee you will be a stronger programmer and interviewer by the end of it.

When I was finishing my PhD my mind was set on becoming an academic, but the job market was really bad at the time (circa 2011). On my supervisor’s suggestion, I applied to Google. It was the only industry job I applied for, as it was the industry job that stood out to me the most. But once I decided to apply, I did a lot of preparation for the interview. I am positive I would not have passed the interviews if I had taken them the day I applied: the time I spent preparing for the interviews was essential. When I went into the interviews, I felt I was as prepared as I could be. The hard work paid off: I received a job offer to join Google Pittsburgh, and have been working as a SWE at Google since 2012. 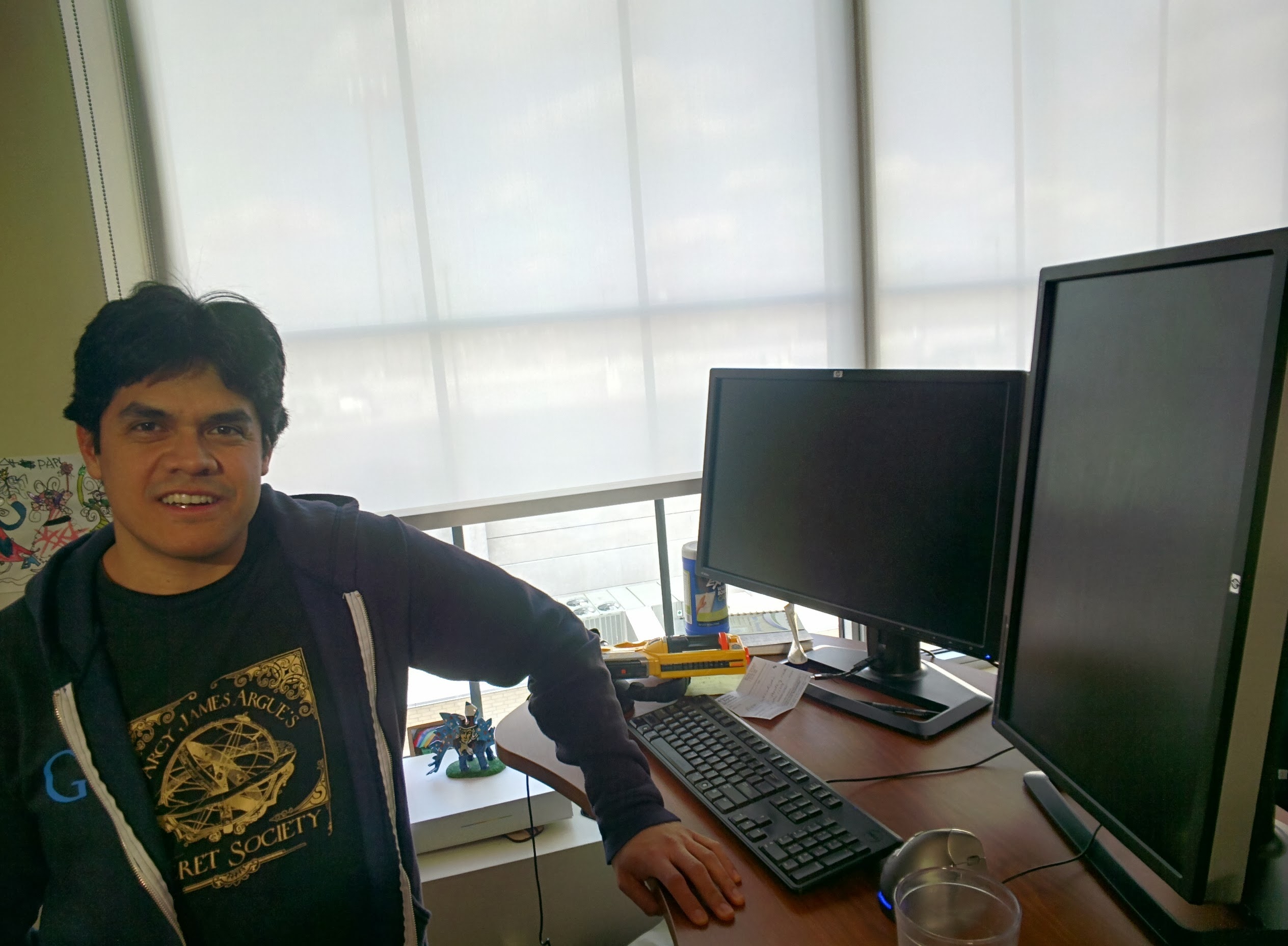 The rest of this post is based on my experience:

Following the suggestions here won’t guarantee you’ll get the Google job, but it should help.

How do I apply to Google?

You can check out the main Google careers site to find jobs that you feel would be a good fit.

Referrals often help, so if you know someone already at Google, ask them to refer you. If you don’t know anyone at Google, you’ve already applied and haven’t heard back in a while, check out my post on tips for preparing your resume. Note that this still does not guarantee you will get called for an interview. Unfortunately I know very little about how candidates are selected for interviews, and have very little influence on that process.

How do I prepare for the Google interview?

There are (at least) three main components to doing a good job in the interviews: coding, algorithms & data structures, and personality. Google (and other companies) often have workshops where you can do mock interviews; search for them and attend them if you can.

You need to be able to write functioning code, ideally that would compile/run right off the bat. The language isn’t super important, but you’ll need to specify what language you want to interview in, so make sure you know it well. Pseudocode is not a language.

If you rely on fancy IDEs for writing code, go barebones! Turn off syntax highlighting and autocomplete on whatever program you use to write code. In fact, try to use a barebones vim to write all your code (even today I still use a pretty barebones vim for writing most things, including this blog post). I guess you could also use Emacs.

When I was preparing for my interview I had been mostly coding in C++, so I decided to focus on that. I found an online programming competition that had logs of previous competitions, so I could “pretend” I was competing. The great thing is that this online service could programmatically check my code for both syntax and algorithmic correctness. I did enough of them that I could eventually write C++ code from scratch that would compile and solve the problem. It took many, many iterations before I reached this point. For a long time I still had to look up what were the libraries I needed to include, how to do proper I/O, etc.

I don’t remember what site I used, but it seems topcoder has an arena of practice problems which serve the same purpose.

It’s also really useful to go through sites like glassdoor where there are lots of past Google interviews. Try solving all those problems! Note that if you see a problem in a place like this, it’s very unlikely you’ll get asked that problem during the real interviews.

Try writing code on a whiteboard (or on a piece of paper by hand if you don’t have access to a chalk/white-board). It is very different to code on a whiteboard, but that is what you will be asked to do at the interview. It’s best if you’ve already had some experience doing it! What I’d recommend is to practice writing a full program on a whiteboard, then code it up in your computer and make sure it compiles/runs in one go. If it doesn’t, try again!

It’s also extremely useful to practice coding on a whiteboard while someone else is watching, to get used to the potential anxiety response.

Although a few syntax errors are ok, we do take note if the coding is sloppy and full of syntax errors. It suggests you may not be as familiar with your preferred language.

The book I used to prepare for this was the book I used in my undergrad: Introduction to Algorithms by Thomas H. Cormen, Charles E. Leiserson, Ronald L. Rivest, and Clifford Stein. I’m sure there are many other books you could use for this purpose, but this is the one I already had on my shelf. Someone suggested that Introduction to Algorithms: A Creative Approach is a good book.

There’s no real Minimal Set of Algorithms & Data Structures To Know, but here are a few things you should definitely know about and be pretty comfortable with. Note that this is by no means exhaustive, and if you feel I’m missing something here, let me know!

The above list is not a sufficient set of things to know, but I’d say it’s a reasonable basis. The expectations for what you should already know are pretty reasonable.

It was already hinted in the list above, but you should be able to perform complexity analysis (i.e. big-O) on whatever code you write. I personally almost always ask this question after a candidate finishes writing their code, as it shows they’re able to analyze the effectiveness of their implementation. As I’ll detail below, even if you can only provide a naive solution to a problem, it helps a lot if you can analyze it properly.

This one is kind of hard to prepare for, but it’s still important. One of the questions we need to ask ourselves as interviewers is: Would I want to work with this person? If you’re a genius and are able to solve all the problems that get thrown at you, but you behave like a total jerk during the interviews, you have a pretty low chance of getting hired. I don’t have much advice in terms of preparation, but there are a few points to keep in mind during the interview, which I’ll list further down.

Congratulations, you have interviews scheduled! This is already a great achievement (not everyone gets invited to interviews), so you should feel proud of yourself. Here are a few important things to keep in mind:

Phew! You made it through, congratulations again! Timelines vary a fair bit, but here is roughly what happens now.

This post ended up being a lot longer than I anticipated, but I really hope it proves useful to you. Although it is written mostly for SWE interviews at Google, most of these suggestions should be applicable to SWE positions at other companies. I interviewed for Shopify a few years ago and I applied all the techniques above; I ended up getting an offer, but declined it as I got invited to join Google Brain (where I am happily working now).

This post should also be somewhat helpful for non-SWE roles. The non-SWE role I am most familiar with is Research Scientist (RS). I have conducted a few research interviews for RS roles, but not enough to be able to provide concrete guidance. What I will say, though, is that even for RS roles you have to pass some coding interviews. I interviewed someone for an RS role who was super strong on the theory but did quite poorly in the coding interview, so I gave a no-hire recommendation (the person never joined Google, but I don’t know if an offer was made or not).

There are also many other people who have shared really valuable advice. Mekka Okereke shared some great advice in this thread, as well as Steve Yegge (thanks Pascal for reminding me of these posts!). A few people have also suggested Cracking the Coding Interview as a good book to study.

If you have suggestions, unanswered questions you’d like addressed here, or any other types of comments, feel free to reach out (see footer below).